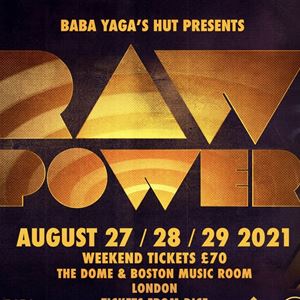 Please note the booking fee for this event includes a Venue Levy of £0.50 which is charged by the venue

Since the first time it manifested its monstrous assault in the Tufnell Park region back in 2014, Raw Power has earned an international reputation as a righteous psychic celebration of sound and fury - a weekend whose inspirational intensity is as potent as its tinnitus-risking aural abandon. Boasting an annual handpicked selection of innovators, mavericks and maniacs from the wildest, heaviest and most intimidating frontiers of alternative and experimental music, from the legendary to the freshly formed, the last half-decade has seen global iconoclastic forces from Faust to Melt-Banana, from Circle to The Ex, and from Godflesh to Gallon Drunk unite to radiate revelation in abundance.

2021 already sees an intimidating array of talent confirmed for what's set to be one of the most riotous affairs yet - Raw Power is delighted to welcome one of the world's ultimate party bands Chrome Hoof - the ritualistic troupe who inhabit a mindscape whereby Studio 54 exists on Mars - to the fray for their first one-off show in countless years, a cranial-collapsar to celebrate their 20th Anniversary. Showcasing perhaps the most diverse first announcement yet for the fest, the VHS-abusing soundscapes of Pye Corner Audio, the noir-tinged narratives of Enablers, mighty riffage from Shuck and Torpor, coruscating noiserock from Grey Hairs, Human Leather and We Wild Blood, electronic brinksmansip from Isn'tses, potently percussive tumult from Rattle, and tribal bass from the German-based Japanese duo WaqWaq Kingdom will be joining the fray.

Simultaneously flying the flag and destroying the paradigms for heavy and experimental music as we enter a new decade, Raw Power is set to fry brains and re-align perspectives once again. Dance, indeed, to the beat of the livin' dead.

Returning to the 2014 date of the August bank holiday with the line-up being moved over from the rescheduled 2020 date. We can't wait to have everyone back at the festival.